Coquitlam and the Meech Creek Giant

The Coquitlam Watershed, a deep network of remote unlogged valleys, is an old-growth stronghold in an otherwise heavily logged and urbanized region. The vast watershed provides one of the regions most critical drinking water sources. As such,  it is off-limits to forestry (since 1995) and the public is banned access (but, join a free tour). Tracts of old-growth still extend down from the valley’s granite arretes to the reservoir’s edge. The potential of this 20,000 ha watershed to harbour tall trees has not been thoroughly studied and only a few big tree hunters have knowledge what’s within. 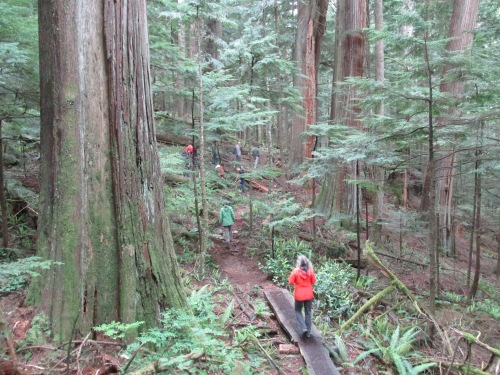 Plenty of big cedar along an old-growth trail part of the Coquitlam Watershed tour.

Big tree hunter Ralf Kelman is one individual who has explored it over the years. With Metro Vancouver watershed employees he discovered a grove of immense, widely-spaced trees north west of the reservoir dam. Within it, the tallest Douglas-fir in Canada —officially measured by Dr. Robert Van Pelt at 94.3m tall, 2.6m diameter at breast height. It was named the Meech Creek Giant as it grows on a creek of the same name. The giant was likely 500-600 years old when alive. Another giant Douglas-fir across from it was nearly as large. Unfortunately, the trees canopies have been declining for many years, and both are now dead.

When alive, the Meech Creek Giant was measured at 94.3m. These stitched together photos show an impressive snag left in May 2016

The Meech Creek Giant has had a brush with death before. When discovered, the superlative tree had an endangered location, which earned it headlines and made it a champion tree in the battle to halt logging. At the time, forest harvesting was permitted in the watersheds, and rampant (period 1967- 1995). The Meech Creek Giant itself, and surrounding forest, were slated for harvest. Concerned citizens dependent on it as a water source rallied and ultimately pushed for logging to stop. 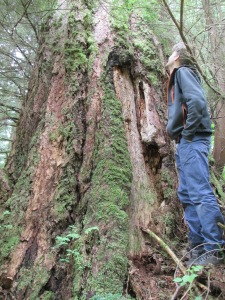 MIssing bark and rotten wood on the Meech Creek giant’s trunk shows signs that decline may have started decades ago.

When the the BC Big Tree C0mmittee visited in May, 2016, we saw the Meech Creek Giant needle-less and with sparse mid-size branches. It appeared as a towering cylinder of brown wood . The bark around the trunk was partially open and the wood was rotting within —signs that the tree has been dead since at least a few years. Curious of the  timing and circumstances of it’s passing, I examined aerial photographs of the tree using Google Earth. The photos show major crown dieback between 2004 and 2008. Big tree hunter and BC Big Tree Committee member Shaun Muc explains to me that it had a few branches of life hanging on for some years; by 2012, it was believed to have been fully dead. Large old trees are observed to be decline (e.g., reported in peer-reviewed journals here) across North America and the world, prompting a need to monitor and understand the factors leading to their death. Forest scientists David Lindenmayer et al (2012) who track big tree mortality highlight the implications of this concern: “[large old trees] are keystone structures in forests, woodlands, savannas, agricultural landscapes, and urban areas, playing unique ecological roles not provided by younger, smaller trees.”

Although this tree is now dead its height remains intact. It is likely the tallest snag in Canada. it will main a tremendous heritage artifact until the top weakens, cracks off in a storm, and slowly decomposes on the forest floor. In the meantime, the search continues for Canada’s next 94m giant Douglas-fir, which many experts believe may still be out there.

A chronosequence of aerial photographs taken from Google Earth Historical imagery capture the demise of the Meech Creek Giant Douglas-fir. Major loss of canopy foliage occurs between 2004 and 2008.

The Coquitlam Watershed is a little-known wilderness with trees of national significance. You can easily gain access it by joining a free bus tour of the Coquitlam Watershed with Metro Vancouver. Tours are offered during summer months and involve moderate to easy hiking. You must check their schedule and reserve a spot in advance. 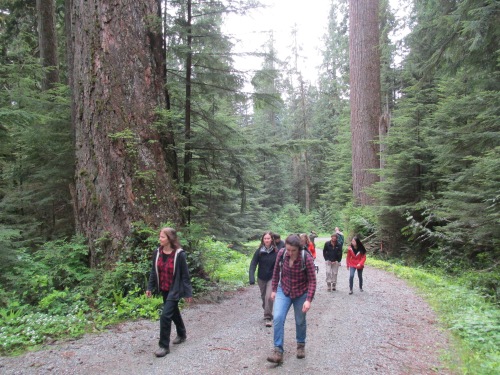 One stop on the tour of Coquitlam includes a short hike through a large tract of old-growth. The trail has some steep sections but it is not difficult.

On our tour we also visited a mountainside with contiguous old-growth of impressive size. A one hour walk led us through several Douglas-fir and lots of red-cedar over 2m in diameter. However, all of the Douglas-fir in this area had their tops blown off at between 40-60m in height. We were curious if the tops had blown off during particular storms, or if some threshold of wind exposure exists, which prevents them from growing above a certain height… All in all, I left the watershed having seen a lot, but with new questions and quite a bit of optimism that there may be many more undiscovered giants in the watershed. This question could be efficiently answered with Lidar data and technology. Lidar has been used widely in Washington, Oregon, and California to locate and map their tallest trees. Some lidar data may already exist for the Metro Vancouver watersheds… . If the data exists then we could efficiently survey and identify the tallest trees, perhaps, finding a new champion tree.

An inventory of trees of high ecological and cultural value could assist watershed management in establishing protection measures for monumental trees, such as fire management zones and buffers from road construction. A concern raised around the circumstances of the Meech Creek Giant’s death is that large boulders were placed around its base to buttress the bank of Meech Creek in years prior to its decline and death. 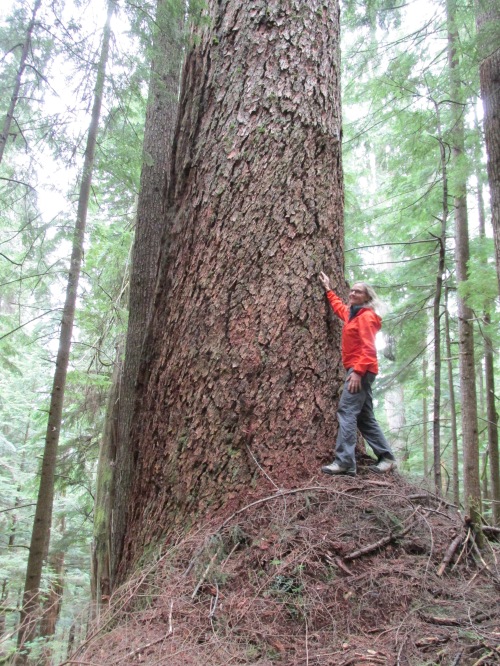 Professor Sally Aitken of the BC Big Tree Committee stands beside one of the many giant Douglas-fir located along the old-growth walk.

The BC Big Tree Committee would like to thank Erica Forssman and Jesse Montgomery of Metro Vancouver for an unforgettable tour of the Coquitlam Watershed.