The giant elm of Agassiz 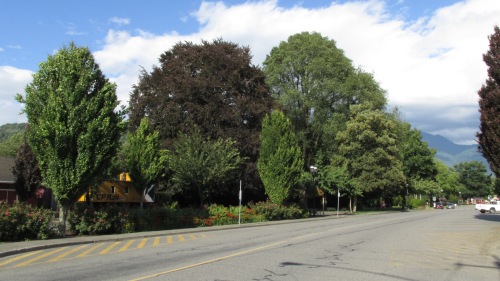 A giant copper beech (left) and even bigger dutch elm (right) in Pioneer Park, Agassiz, BC.

In the little agricultural town of Agassiz, BC, 125 km east of Vancouver, you can find some of the largest non-native broadleaf trees in South West BC. The giant trees are an unexpected attraction in this otherwise unremarkable town, which claims to the “corn capital of BC.” Like other tourists passing through Agassiz on route to destinations such as Hope or Cultus Lake I would have missed them entirely had I not been arriving by bicycle. Arriving by bike, we were in need of a little shade to picnic under, and there they were… a collection of superior trees right in the heart of Agassiz in the lovely Pioneer Park.

The most notable tree there is the dutch elm hybrid (Ulmus x hollandica), an immense tree of a genus that is highly regarded for its size. Unfortunately, these large trees have been decimated around the world by dutch elm disease, which is caused by three different species of a pathogenic sac fungi (Ascomycota). Historical dutch elms in Europe often reached 50m in height with some notable trees more than 600 years old and >5m in girth. While this tree is quite young —no older than 1860 when settlers first arrived— it’s already obtained good size and is a great specimen to get to know this incredible genus of trees. I measured the tree height using an inclinometer to be 41.7m tall. Its fat trunk is 2m square, making it larger than other elms I’ve seen in the region. Other notable elms in Vancouver include the surviving American elms left at UBC, especially the beautiful one hiding along Agricultural Road. Also, there are tall (about 32m) elms along the 12th Avenue bicycle route just west of Arbutus street.

This large dutch elm measures 2.0 m in diameter at breast at height (dbh – measured at 1.3 m above ground level). 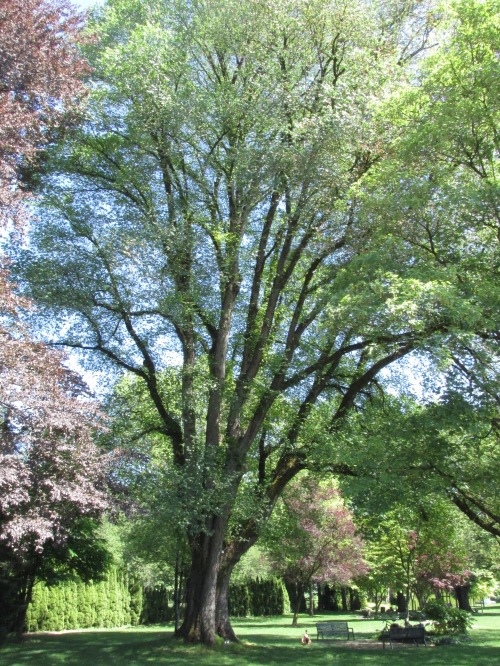 The glorious elm provides shade to a cyclist on a hot summer day.

There are other fine trees of different species within Pioneer park. The trees are conveniently labeled so that you can easily identify which tree is which. The second most impressive tree is a copper European beech (Fagus sylatica). Beech are one of the most common non-native trees in the region that frequently obtains impressive size. They are generally identified by their bark, which is smooth grey and sometimes rippled like the the legs of a giant elephant. The specimen here has copper to purple coloured foliage —a trait introduced to some cultivated beech trees for a scenic colouring effect, but not all planted beech are this colour. It’s the largest diameter beech I’ve seen at 1.8m dbh. It is not quite as tall as its neighbour, the great elm of Agassiz, but the beech still stands a lofty 36.7m tall.

A large copper European beech in Pioneer Park is 1.8m in diameter and 36.7m tall. 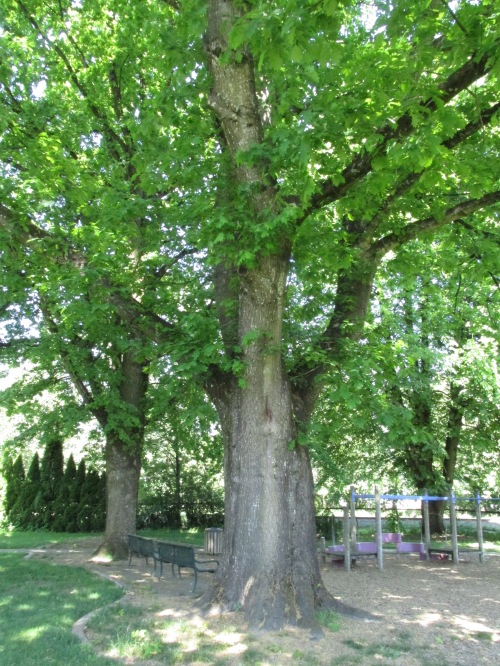 My suggestion for visiting these trees if your not already nearby is to make it a picnic stop next time you are passing through the Fraser Valley. It is immediately off the scenic #7 highway, and is highly accessible from the Trans-Canada Highway via Highway 9, which goes over the Agassiz Bridge. There are also a number of shops to visit and a wide variety of places to eat nearby. Better yet, I’ll recommend a visit using my favourite mode of exploring big trees… weave a visit to this lovely park using a bicycle-powered exploration of the Fraser Valley. As this lovely story testafies, you don’t need to be an expert cyclist to give it a shot. 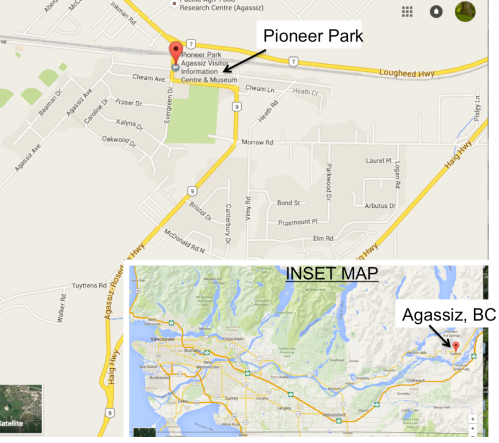